Home » News » Not a place of quiet: a conference in Moldova highlights the role of adult learning centres in local development
22.12.2022 cooperation, financing, inclusion, Outreach

Not a place of quiet: a conference in Moldova highlights the role of adult learning centres in local development

Against the background of multiple crises and rising political tensions in Europe, how can adult learning providers highlight their contribution to democracy and social inclusion? A recent conference in Chisinau, Moldova, organised by DVV International in collaboration with EAEA, looked at new spaces for learning, and the challenges and opportunities of partnerships between adult learning providers and municipalities to encourage local development.

The International Conference on the Role of Adult Learning and Education in the Development of Local Communities, which took place on 9-10 November in Chisinau, Moldova, brought together participants from Armenia, Bosnia and Herzegovina, Belarus, Georgia, Moldova, Turkey and Ukraine.

Co-organised by DVV International in collaboration with EAEA, the event focused on shared issues in local development of adult learning and education. From governance and financing to increasing participation of vulnerable learners, participants addressed key challenges and benefits of collaborations between adult learning providers and local authorities. The meeting also provided an opportunity for EAEA members to discuss issues of shared interest during a side meeting.

“If there is no support for adult learning at the national level, then the local stakeholders take up the task,” said Prof. Dr. Michael Osborne from the University of Glasgow, who is also the Director of PASCAL Observatory.

New European and global frameworks for adult learning, such as the New European Agenda for Adult Learning and the Marrakech Framework for Action, underline the potential of learning in communities. One of the focal areas of the Marrakech Framework for Action is a “culture of lifelong learning”, described as a “public endeavour that serves not only the world of work, but also individual well-being and the common good”.

As discussed during the event, ideally the ambitious objectives set out at the European and global level translate into adult learning being a priority at the national level. This, unfortunately, is often far from reality: in many countries adult learning and education still lacks any political recognition and consequently adequate financing.

“Most of the world’s population are adults – but the funding for their education is very low, as demonstrated in the Global Education Monitoring Report. Financing for adult education needs to be increased dramatically,” said Prof. Dr. Heribert Hinzen, former Director of DVV International and UIL honorary Fellow, who introduced a wider policy aspect to cooperation between local authorities and adult education centres.

Throughout the two conference days, we heard several examples that demonstrated the ways in which adult learning providers and local authorities can collaborate, against very different backgrounds. It was especially inspiring to see the extent to which adult learning organisations can successfully establish an ecosystem of adult learning.

A case in point is the Adult Education Centre in Norden, Germany, which in addition to classrooms hosts an exhibition hall, gym, café, restaurant and kindergarten, among others. Such a diversity of activities is possible thanks to a structured approach at the management level, which operates along four directions: general training, professional training, social services and intergenerational services. In addition, the centre enjoys a successful collaboration with the Autrich’s district organisation, running refugee assistance and support since 2015. 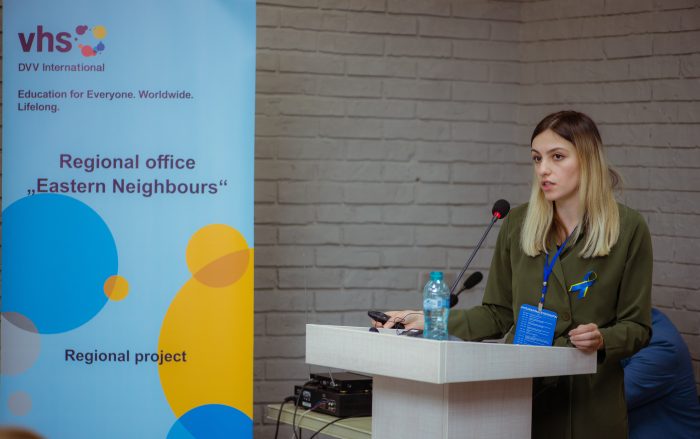 Victoria Furhalo speaking at the event

A place of gathering, not a place of quiet

Several case studies brought forward by the speakers and participants showcased how a successful collaboration at the local level can foster participation in adult learning, and encourage especially vulnerable groups to take part in learning. In Potlava, Ukraine, training centres collaborate with local authorities in the implementation of projects, with an expanding circle of partners. This has led to a steady increase in the number of learners, especially 3rd age learners, which more than doubled between 2018 and 2021.

Also elsewhere in Ukraine, local collaborations have already borne fruit. In Lviv, libraries have become an important space for non-formal adult learning, as part of the Strategy for Culture Development, which will be in place up to 2025; one of the priorities of the strategy is to encourage non-formal education.

“We see a contemporary library as a new place, which is not a place of quiet – it’s a place of gathering; a third place, after your home and workplace,” explained Victoria Furhalo from City Institute Lviv and Education Centres’ (CE) Network Ukraine.

The activities organised by libraries are diverse, and include a dancing club for older citizens, a Ukrainian language speaking club or art therapy for Internally Displaced Persons, to only name a few. Some libraries have been established with the aim of supporting specific target groups, such as Cencoteka, which works with visually impaired citizens.

Since 2019, the activities are coordinated by the CE Network, which includes eight libraries. “Our vision is to provide a quality non-formal education experience for everyone,” said Furhalo.

“Life in war highlighted the importance and power of non-formal education,” she continued, providing examples of activities launched after the war broke out in February 2022, such as a gardening course organised for refugees and local citizens, or psychological support that is offered by libraries.

Refugees are also a primary target group for organisations in Moldova. At the Chisinau Municipal Youth Centre, which the participants visited as part of the conference programme, refugees from Ukraine not only participate in the activities, but also become volunteers themselves.

According to Dato Jikia from DVV International Georgia, a collaboration between local authorities and adult learning providers brings benefits to both sides, making the arguments for advocacy clear. “Adult learning providers can play an important in identifying educational needs of the local population, of the local self-government or of local businesses,” said Jikia.

In Georgia, adult learning organisations provide capacity-building to municipalities, by organising study visits in and outside of Georgia, by lobbying educational needs of municipalities towards the central government, or by offering a structured annual training programme for municipalities.

In addition, adult learning centres are clearly important for local citizens. They can provide a meeting space which is free of political tensions, instead accumulating creative, cultural and social energy.

Investment in adult learning as a political choice

“We live in such difficult times, I can’t think of anything more important than investing in educated and empowered citizens,” said Gustav Fridolin, teacher at the Stockholm City Mission, former Minister of Education in Sweden and member of the EAEA Executive Board.

As a country with a long-standing tradition of popular adult education (folkbildning), participation rates in Sweden are high; over one million adults take part in study circles annually for a total of a 10 million population.

He described the principles of folkbildning as free and voluntary (which means learning provision is funded by the state, but not state controlled); with meetings in an atmosphere of equality; formed by and around the participants. The aim of folkbildning is to not only understand the world but also to change it.

“Everyone should try to be an activist in their own life,” said Fridolin. 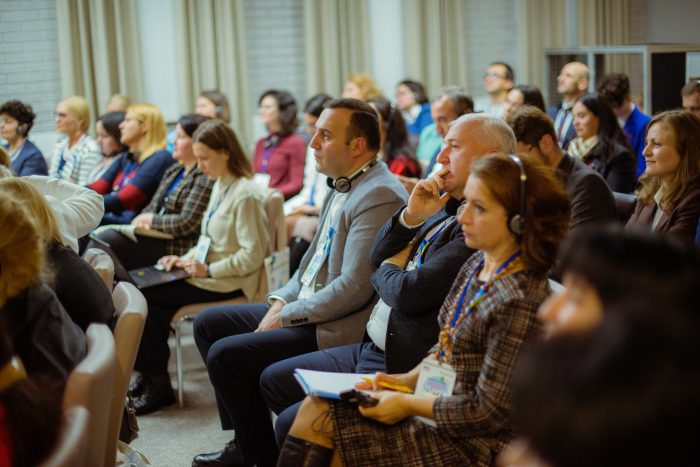 Participants of the conference

As of 2022, as many as 156 folk high schools are running in Sweden, most of which are managed by civil society organisations. Some of the courses are organised by municipalities and are eligible for public loans, especially those that aim at second chance education for adults.

While the concept remains popular among citizens, it is increasingly contested, with fears of folkbildning losing the political support it has enjoyed for more than a century.

“If we want to support vulnerable groups, we first have to discuss democracy”, said Dimitris Degiliannis, deputy mayor of Larissa, adding that education is first and foremost a political choice. It was the city’s decision to address economic and social issues in 2015 by becoming the first Greek Learning City of UNESCO.

From 2017 onwards, the city has addressed adult learning and education more explicitly by running the “Citizens’ University of Larissa”, with 12 learning cycles, including language courses for refugees and immigrants, disability awareness program for municipal councilors and services, computer courses for the third age, the training of teachers for the use of art in education.

“It is a learning task for cities to continue to move forward, be more resilient, healthy and support the view that a core value of a learning and healthy city’s identity is democracy, which is a way of living together,” concluded Degiliannis.

For more information about EAEA’s work with members outside the EU and its working group “Europe is more than the EU”, please visit EAEA’s “Why Join” page.

A wider access to Erasmus+ programme is needed in Eastern Europe

EAEA urges the EU to offer more opportunities for participation of Eastern European non-EU countries in the Erasmus+ programme.

European adult learning and education organisations are ringing the alarm bell: the energy crisis and inflation in Europe are spreading far and wide and are...

The "Forgotten" of digitalisation

The European Association for the Education of Adults (EAEA) organized their event, titled "The Forgotten of Digitalisation," during the LLLWeek of 2022 in Brussels.

The EAEA is looking for an Administration Officer

We're hiring a full-time Administration Officer to join our motivated team in Brussels. Are you a wizard in administrative, HR, and financial matters? Do you have a minimum of 5 years of relevant working experience, preferably in a European environment, and speak fluent English and either Dutch or French? Then we're very much looking forward to meeting you soon!

Not a place of quiet: a conference in Moldova highlights the role of adult learning centres in local development

Against the background of multiple crises and rising political tensions in Europe, how can adult learning providers highlight their contribution to democracy and social inclusion? A recent conference in Chisinau, Moldova, organised by DVV International in collaboration with EAEA, looked at new spaces for learning, and the challenges and opportunities of partnerships between adult learning providers and municipalities to encourage local development.