Fostering a city-wide culture of learning

“The Citizens’ University as an idea did not come by chance,” – says Dimitris Deligiannis about the “Citizens’ University of Larissa,” the initiative which won the Grundtvig Award 2020 on Outreach and Access in Adult Learning. “It is the result of a strong political will to implement actions based on the humanitarian principles of Lifelong Learning as a response to the recent economic and social crisis.”

What was the main purpose of the initiative?

“As early as 2014, the new municipal authority set the goal of creating a strong network of stakeholders and active citizens at all levels of local society, with the aim of transforming and evolving citizens. The project was named Larissa – Learning City. Following the award, Larissa received by  UNESCO in 2017 for its initiatives as a member of the global network of Learning Cities, the mayor announced the establishment of a new, local institution, the Citizens’ University. Its purpose is to provide organized Learning Cycles (courses) for all the citizens of Larissa, giving priority to the vulnerable groups.

Citizen’s University refers to the progressive tradition of the humanitarian view of adult education in the 19th century, which aimed to improve the educational level of socially vulnerable groups. Furthermore, it embraces concepts such as critical thinking, the transformation of stereotypes, and the empowerment of citizens.

How does your project foster the outreach and access approach?

“It was not an easy process. From the first moment, we tried to make the new institution a product of a collective effort of the whole city. While lacking experience of such initiatives, we invited adult education experts, municipal officials, employees of the Municipality, and representatives of stakeholders to cooperate. As a result, a coordinating scientific group was established. Alexis Kokkos, Professor of Adult Education at the Hellenic Open University, was appointed as scientific responsible of the institution and Dr. Ted Fleming, Professor at Columbia University in New York, as a scientific consultant.

Collaboration,  promotion of active citizenship, well-structured education programs and their connection with action, and the humanitarian principles of adult education are the main criteria for shaping the learning cycles. We had programs such as Parents’ Schools, Greek courses for refugees and immigrants, disability awareness program for municipal councilors and services, computer courses for the 3rd age, holistic intervention in the Roma population, the training of teachers for the use of art in education. The problems, of course, are not lacking. We are moving forward each step at a time, and I believe that the given answers, despite the challenging environment, are convincing.” 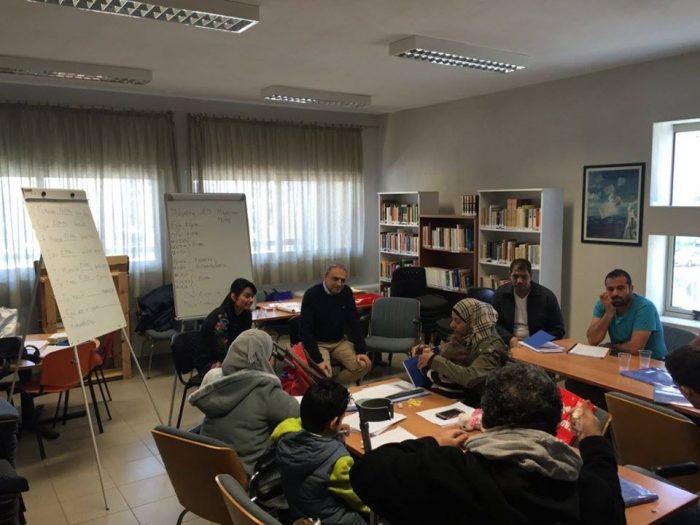 “There are programs that I would single out for different reasons,” says Dimitrios Deligiannis. What, in my opinion, is the most representative of our policy for the continuation, is the Citizens’ University way of the intervention, during the period 2018-2019, in Nea Smyrni, a district of Larissa where a significant number of Roma lives. The challenges are numerous. In collaboration with the educational community and local stakeholders, we organised an intervention that refers to all the existing challenge: programs to deal with illiteracy and school dropout, health education, treatment of chronic infrastructure problems, cleanliness and sanitation.

The Citizens’ University, in collaboration with the University of Thessaly, organised departments to provide primary school diploma to adult Roma. Complementing those actions, we initiated a parents’ school, a program for children’s creative employment, and a new dental clinic, among others. Such interventions take time to pay off, and many talk about dubious results. However, given the past failures, the need for new, integrated approaches has been confirmed. And so we must move forward.”

Outreach and access approach: Learning cycles with emphasis on the support for vulnerable groups

EAEA answered the open Consultation on Individual Learning Accounts, launched by the European Commission by having a critical look at the pros and cons of Individual Learning Accounts. ILA do have the potential to function as a constitution of entitlement and right to adult education, however, they can also include some risks, especially if not implemented correctly. The Commission's consultation will stay open until 16 July and can be accessed here.

The perils and potential of Micro-Credentials for ALE

Micro-credentials have the potential to be a tool that can boost access and participation to lifelong learning, they might even attract a larger and more diverse number of learners However, they also bear certain risks that need to be taken into consideration. This statement is outlining those and includes food for thought to submit feedback yourself

An update on MASTER project activities

MASTER project is moving forward with the preparation of MASTER plan of tailored learning activities on Personal, Social and Learning to Learn competences. On 19, 20 & 21 July, the partnership will organise a Transnational Learning Activity to exchange ideas and dive deeper into the plan.