Home » the Centre of Successful People

What was the main idea of the project?

“The main goal of the project was to promote the inclusion of visually impaired people in the educational process in the sphere of modern computer technologies and to create conditions for independent use of modern banking tools.” 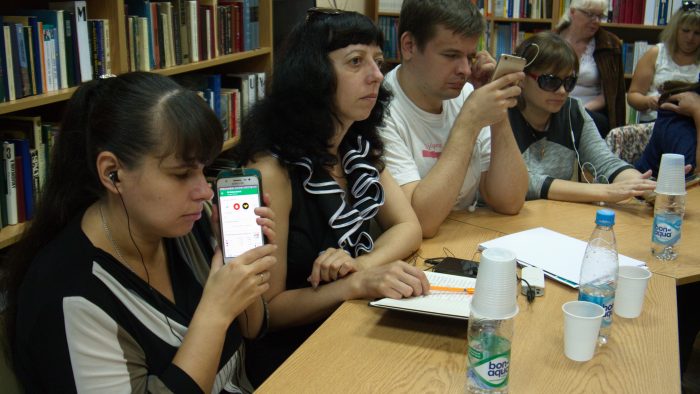 The project goal was achieved through educational seminars, where participants used guiding materials based on a tactile writing system of Braille and on the audio functions of mobile banking applications

During the project, 8 seminars in 6 different regions of Belarus were organized. I myself organized the seminars, as well as a trainer Alexandr Severin, and both of us, despite visual impairment, lead a successful and fulfilling life.

This is also the peculiarity of our project, when blind people become adult trainers themselves and prove that people with sight disabilities can live independently and get lifelong education.

What did the project achieve?

“As a result of the project, blind people were able to use mobile banking applications without visual control and were able to perform banking operations independently using the functionality of their mobile phones. The acquired skills helped to improve the life quality of blind people, their independence from others, as well as increased the financial literacy of the project participants. The banking providers learned about the needs of their new customers and took steps to adapt mobile banking applications for the blind.”

Among other skills, participants learned how to carry out transactions, open accounts, control cash flow and expenses

What was the best practice of the project?

“This project demonstrated new forms and methods of work on inclusion of visually impaired people in the society using adaptive financial instruments and engaging all the stakeholders in the educational process: adult learners, state authorities and commercial banks. The project had an impact on the integration processes that began in Belarus when the country joined the Convention on the Rights of Persons with Disabilities and became an important indicator of how a small initiative can turn into a catalyst for major changes in the future. We have made the first steps to transform the public’s consciousness towards people with disabilities and have demonstrated the importance of education in the lives of blind and visually impaired people. We gained valuable experience in teamwork and were able to implement the principle of peer-to-peer education.”

Learning to manage finances by ourselves