MEDIA RELEASE. The 16th annual Grundtvig Awards were given to projects which successfully embrace the life skills approach in adult education.

Life skills are capabilities for life and work in a particular social, cultural and environmental context.  They exceed the concept of basic skills and are closely related to the key challenges adults face in the modern world.  Life skills are building blocks of independence and self-efficacy. The needs of the learners are the starting point of the life skills approach.

Bringing learning out to the streets

The winning of the national category, the Street University, is led by Università Senza Età Città del Trattato di Campoformido (USE) and covers most of the Italian territory. It targets functionally illiterate people who, although they know how to read and write, are not able to contextualize a piece of news. The project aims at bringing learning out of classrooms, organising free training meetings in bookstores, libraries, bars and squares. Neighbourhood associations reach out and try to involve all the people who have not had educational opportunities.

Mariella Ciani from USE says the project delivers the message about the importance of lifelong learning in an informal and friendly setting.

“What we are lacking in Italy is the recognition of acquired competences in a non-formal setting. We hope that the visibility of this project and this recognition will reach political decision makers, and make them reflect on a reform that Europe is asking of us and that in many countries is already a reality”, says Ciani.

The jury was impressed by the scale of the project, and it’s innovative approach to bring learning into public spaces and within reach for everyone. 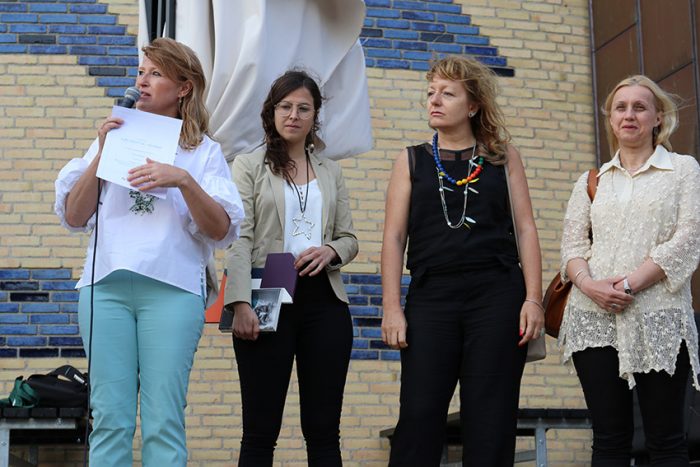 Olena Korzhykova and representatives of the Open IT Up -project from DomSpain.

Empowering people to start a business

The winner of the European category, Open IT Up, led by DomSpain, seeks to reinforce adult educators’ competences and provide them with tools to empower adult learners to start their own business.  Open IT Up targets vulnerable groups of adults and equips learners with basic skills, such as literacy and digital skills as well as knowledge of entrepreneurship. The project has developed an e-learning language course in several languages on the topic “Start Your Own Business”.

“This award means the significance given by the EAEA to acquiring life skills in adult education and, more important, in informal and non-formal environments. We believe such a goal should go beyond this project and become the essential part of adult education all over Europe”, says Olena Korzhykova from DomSpain, speaking on behalf of all the partners in the project.

There were several points which made Open IT Up a winner: The project targeted both adult learners and educators and provided learning and working materials for both of them. The digital tools produced in many languages ensure a wide dissemination for the results.

The winners were announced on 26 June 2019. The award ceremony took place in the Brahe Pavillon in Copenhagen and was a part of the EAEA General Assembly and Annual Conference.

The EAEA Grundtvig Award was launched in 2003 in order to recognise and celebrate excellence in adult education. It highlights project results that produce new ideas, new partnerships, new methodologies and a new understanding of how we can work in adult learning.